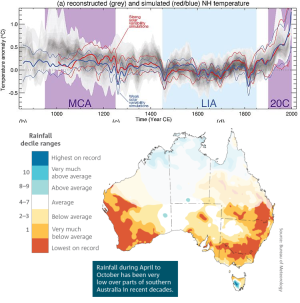 Greenhouse gas concentrations in the atmosphere are the highest in at least two million years. Global annual mean carbon dioxide (CO2) concentrations reached 410 parts per million (ppm) in 2019 and the CO2 equivalent (CO2-e) of all greenhouse gases reached 508 ppm.

This section provides a brief summary of the latest scientific understanding of climate trends at the global scale (over the past millennia) and explores what this has meant for Australia since the early 19th Century.

This content draws on the latest peer-reviewed scientific literature, such as synthesis reports produced by the Intergovernmental Panel on Climate Change (IPCC) and the Australian State of the Climate report produced by CSIRO and the Bureau of Meteorology .