Australia is already experiencing the impacts of climate change, which vary across the country. Australia’s climate is projected to continue to change into the future.

The State of the Climate report is produced every two years by the Bureau of Meteorology and CSIRO. It provides an overview of the latest knowledge on how the climate is changing and how it will continue to change in the future. The report draws on a range of national and international sources, including national projections data and information provided through the Climate Change in Australia website and past observational data from the Australian Bureau of Meteorology .

Australia is already experiencing the impacts of climate change: 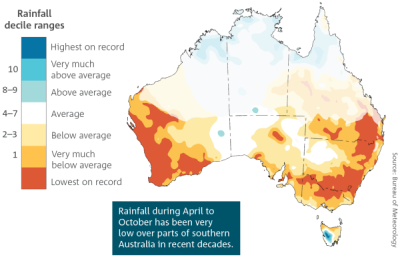 April to October rainfall deciles for the last 20 years (2000–19). A decile map shows where rainfall is above average, average or below average for the recent period, in comparison with the entire rainfall record from 1900. Areas across northern and central Australia that receive less than 40 per cent of their annual rainfall during April to October are faded.

Australia’s climate is projected to continue to change over the coming decades. The following changes are projected: