Changes in mean sea levels and their extremes, as well as sea surface temperatures (SSTs) and ocean pH (acidity) have the potential to affect both the coastal terrestrial and marine environments. This is discussed at length in Chapter 8 of the Technical Report . Impacts of sea level rise and changes to the frequency of extreme sea levels will be felt through coastal flooding and erosion. For the adjacent marine environment, increases in ocean temperatures and acidity may alter the distribution and composition of marine ecosystems and affect vegetation and coastal fisheries.

Changes in sea level are caused primarily by changes in ocean density (‘thermal expansion’) and changes in ocean mass due to the exchange of water with the terrestrial environment, including from glaciers and ice sheets (see Technical Report, Section 8.1 for details). 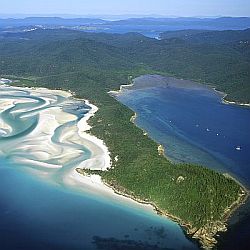 Over 1966–2009, the average of the relative tide gauge trends around Australia is a rise of 1.4 ± 0.2 mm/yr. After the influence of the El Niño Southern Oscillation (ENSO) on sea level is removed, the average trend is 1.6 ± 0.2 mm/yr. After accounting for and removing the effects of vertical land movements due to glacial rebound and the effects of natural climate variability and changes in atmospheric pressure, sea levels have risen around the Australian coastline at an average rate of 2.1 mm/yr over 1966–2009 and 3.1 mm/yr over 1993–2009. These observed rates of rise for Australia are consistent with global average values.

Extreme coastal sea levels are caused by a combination of factors including astronomical tides, storm surges and wind-waves, exacerbated by rising sea levels.

Sea surface temperature (SST) has increased significantly across the globe over recent decades. Increases in SST pose a significant threat to the marine environment through biological changes in marine species, including in local abundance, community structure, and enhanced coral bleaching risk.

Ocean salinity in coastal waters will be affected by changes to rainfall and evaporation. Changes in salinity can affect stratification and mixing, and potentially nutrient supply. A net reduction in the salinity of Australian coastal waters is projected, but this projection is of low confidence. For some southern regions, models indicate an increase in sea surface salinity, particularly under higher emissions.

About 30 % of the anthropogenic carbon dioxide emitted into the atmosphere over the past 200 years has been absorbed by the oceans and this has led to a 0.1 unit change in the ocean’s surface water pH, which represents a 26 % increase in the concentration of hydrogen ions in seawater.

As the carbon dioxide enters the ocean it reacts with the seawater to cause a decrease in pH and carbonate concentration, collectively known as ocean acidification. Carbonate is used in conjunction with calcium as aragonite by many marine organisms such as corals, oysters, clams and some plankton such as foraminifera and pteropods, to form their hard skeletons or shells. A reduction in shell mass has already been detected in foraminifera and pteropods in the Southern Ocean.