Weather can be highly variable on a daily, weekly, or even yearly basis. Today might be dry with a top temperature of 22 °C. Tomorrow might be wet, with a top of 14 °C. The weather is what you experience each day.

Climate is the average weather pattern in a place over at least 30 years. Sydney’s climate is warmer than Hobart – even though occasionally, Hobart’s maximum temperature will exceed Sydney’s.

Australia’s climate is famously variable. The El Niño Southern Oscillation (ENSO), for example, has a major impact on our rainfall, with El Niño conditions occurring every three to eight years and generally resulting in below average rainfall over much of eastern Australia, while wetter than average conditions can occur during La Niña years. 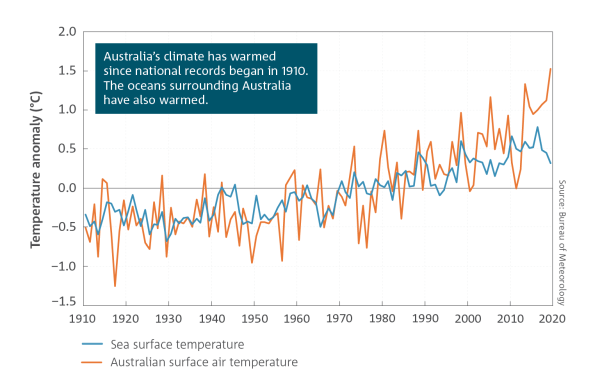 Climate variability describes the way climate elements such as temperature and rainfall depart from the average value in given months, seasons, years, decades or centuries. Consecutive summers, for example, will not all be the same, with some cooler and some warmer than the long-term average.

Climate is said to be stable if the long-term average does not change significantly over time. However, climate in Australia and worldwide is changing. Climate change refers to a statistically-significant trend in climate over many decades. It is superimposed on natural yearly-to-decadal climate variability. This variability can mask or enhance underlying trends.