Sometime in the future, the 10-year moving global mean surface temperature (GMST) will be at or very near +1.5 °C relative to the baseline (reference period) chosen to represent the pre-industrial climate of 1850–1900, allowing for observed uncertainty. At that time, the +1.5 °C warming level will have been reached using our working definition, and this is what we are calling a “+1.5 °C world”. In fact, since it is based on the 10-year average, the climate will have been at or near this threshold for the previous five years. The same conditions are used to define +2, +3 and +4 °C global warming levels.

In reality, there is little chance that the world would plateau precisely at any particular warming level permanently. But even if it did, the regional climate would not instantly be at a new steady state. Because the climate system has considerable inertia, some things take a while to reach a new steady state, or new ‘equilibrium’. Slower processes like sea level rise take hundreds of years to fully reach a new equilibrium, so the sea level will be lower in the first years of a +1.5 °C world compared to if the climate has stabilised at +1.5 °C for a long period.

The date at which the world would first reach a global warming level is determined by three factors:

The emissions pathway the world follows

The warming trend resulting from the emissions pathway

The amount of warming for a given increase in greenhouse gas concentration (known as climate sensitivity) is not precisely known, so this creates a range of possible dates a warming level is reached for a given emissions pathway.

The global climate variability around the warming trend

Climate variability not only affects when the warming level will be temporarily reached (see WMO 2020, Smith et al. 2018), but processes of longer-term variability such as the  Inter-decadal Pacific Oscillation (IPO) could also affect when the 10-year average reaches the warming level. The phase of the IPO could affect the date of reaching the +1.5 °C warming level by up to around 5 years (Henley and King 2017).

Considering physical evidence, observations and models, IPCC (2018) estimates that +1.5 °C will be reached between 2030 and 2052 if warming continues at the current rate. This estimate is under revision for the IPCC Sixth Assessment Report (2021/2022) given observations and new research since 2018.

You can track the projected date of reaching 1.5 °C global warming based on the latest observations using this app:

Results from the Coupled Model Inter-comparison Project phase 5 (CMIP5) climate models used to make climate projections under the future Representative Concentration Pathways (RCPs) are useful tools for gauging the temperature change due to greenhouse gases. They represent a range of plausible climate responses (e.g. climate sensitivity), and each model has its own natural climate variability. So, using the group of models gives a probability range for reaching each warming level. However, models will not produce a simulation in lockstep with the future variability we will experience, so can’t give a precise date for reaching a warming level. The approximate timespan of the window where global warming levels could occur for a very high and a very low emissions scenario show the different pathways we could follow: 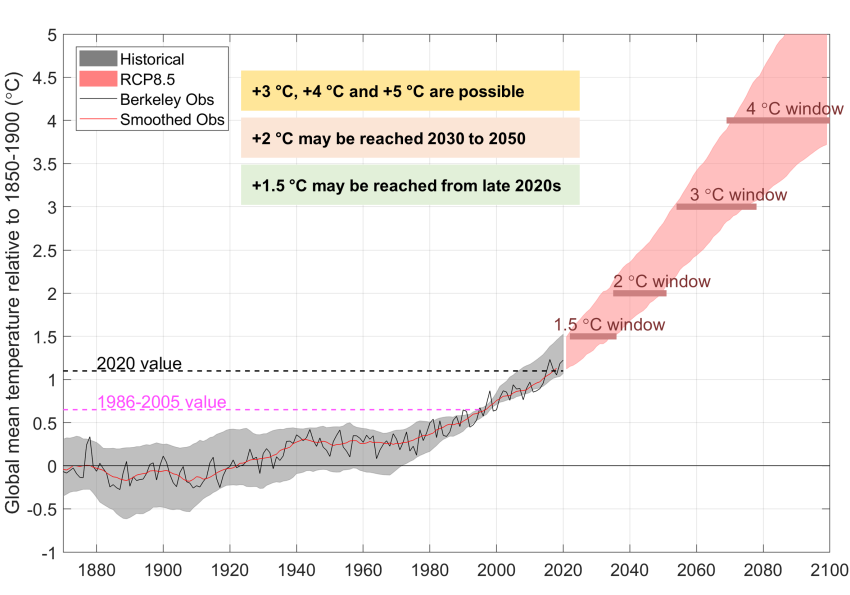 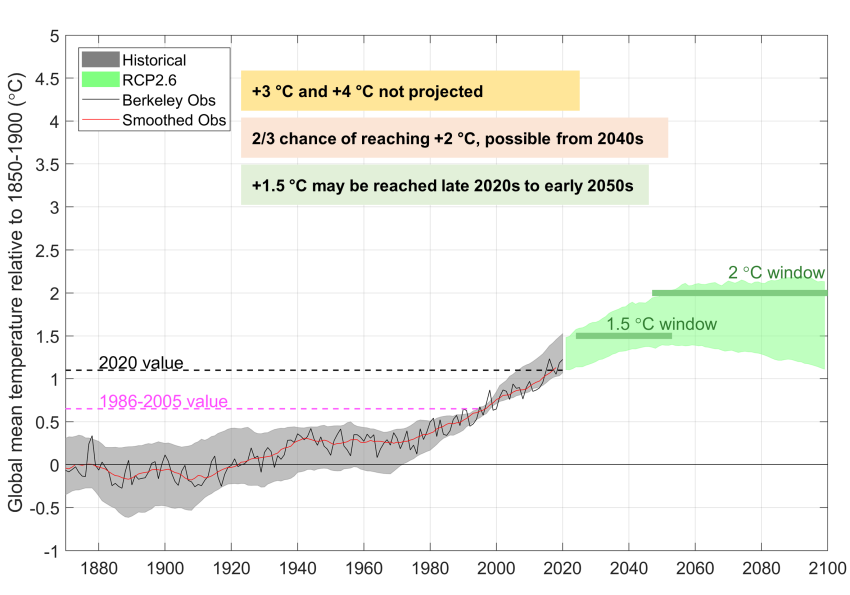 Note: Projections graphs show global mean surface temperature (GMST) relative to 1850–1900 in the Berkeley dataset and CMIP5 models under historical and RCP emissions pathways; a 41-year Lowess smoothed series on the observations is also shown (methods of Hawkins et al. 2020); model series are calculated as a difference to the 1986–2005 baseline and the observed warming to that date is added (methods of Schurer et al. 2017). The approximate timespan of the window where global warming levels could occur is marked.