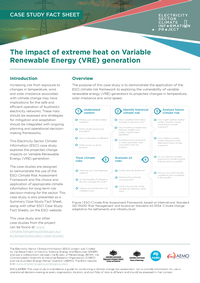 VRE generation sources driven by wind and solar energy are making an increasing contribution to the supply of electricity in the National Electricity Market (NEM). The electrical and mechanical power system components of solar and wind farms are vulnerable to extreme heat, with potential disruption to generator output and system reliability. Extreme heat is also a major driver of customer demand, and outages during high demand periods leave consumers vulnerable and can incur large societal impacts.

The case study team analysed time series of the mean annual values for variables of interest at four Renewable Energy Zones (REZ) from 2020 to 2060 (given the lifetime of solar and wind farm components is about 25 years). Projections of both daily and 30-minute simulations of ‘future weather’ are drawn from a range of six models used to represent the plausible range of future climate. By assessing generator output at this high temporal resolution, the risks can be assessed at relevant time intervals.

WHAT DID WE FIND?

Changes in temperature, wind and solar irradiance were found not to affect average annual normalised solar or wind farm output,2 however, simulations of wind farm impact on one of the hottest days in the sample at Western Victoria indicates mean output during the peak demand period (12pm to 7pm) can reduce to zero (e.g. Figure 2). Therefore, it was of interest to understand the impact of projected changes in temperature, wind and solar irradiance during periods such as these when reliability could be affected by decreased supply. 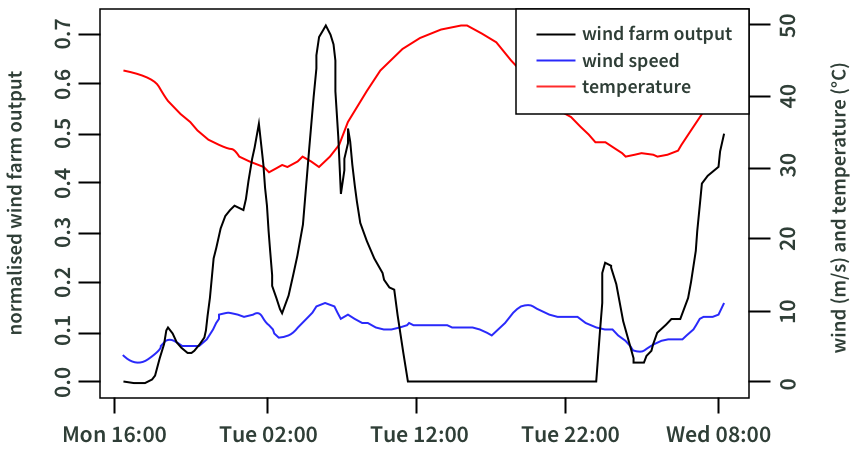 To assess the impact on VRE output during peak demand, the 30-minute modelling was filtered to analyse the impacts on solar and wind farm output (Figure 3). For this study, peak demand periods were defined as the top five hottest days per year between 12pm and 7pm AEST, a time period likely to capture the timing of daily maximum temperature and the timing of maximum electricity demand.

For the peak demand period, solar de-rating was relatively limited for the four case study locations. Wind power generation had greater output reductions under projected temperature increases for the same locations. While the GCMs show high levels of expected year to year variability, there are high levels of agreement regarding the trend, with steepest trends in the regions with the hottest maximum temperatures.

While long term solar output may increase in some locations due to possible increases in irradiance wind farm output during peak demand periods may fall, even if average outputs remain unchanged.

The impact on variable renewable energy could be mitigated by:

This risk assessment is relevant for renewable energy investors and operators as high temperatures tend to correspond to high wholesale price periods.

Extreme temperatures are a system-wide problem for the electricity sector as demand is correlated with temperature. In addition, transmission and distribution lines can’t carry as much power when the ambient temperature is high. 3 Therefore, this kind of risk assessment can be useful for many assets or system decisions.

Scientists have high confidence in the likelihood of temperatures increasing with climate change. Maps of ARI for temperatures and time series projections of multiple variables are available on the ESCI website. The ESCI User Guide explains how to conduct your own risk assessment.

2 This analysis is described in detail in the Technical Report for this case study.

Download
Full case study report and all figures (zip 811.2 KB)
Back to top
~