Planned, draft and published outputs include:

The East Coast cluster region comprises the six coastal regions from Rockhampton to Sydney. The region forms the central part of the eastern seaboard of Australia and encompasses the drainage basins of a number of major rivers that flow from important head-water catchments within sub-tropical mountain ranges through the coastal zone and into the Pacific Ocean. There is considerable variation in the East Coast cluster, both within and between the regions. The cluster includes five of the ten largest significant urban areas in Australia (Sydney, Brisbane, Gold Coast, Newcastle, Sunshine Coast), with the population of the region totalling over 42% of Australia’s total population (ABS 2013). Since January 2014, the previous Catchment Management Association regions (CMA) of NSW have been re-organised into new Local Land Services (LLS) regions. Dominant land uses of the region include extensive urban and peri-urban development, large scale dryland grazing, large mining centres, and valuable agriculture. Internationally significant natural features in the cluster region include the southern end of the Great Barrier Reef, biodiverse rich world heritage rainforest, unique islands and important coastal ecosystems. 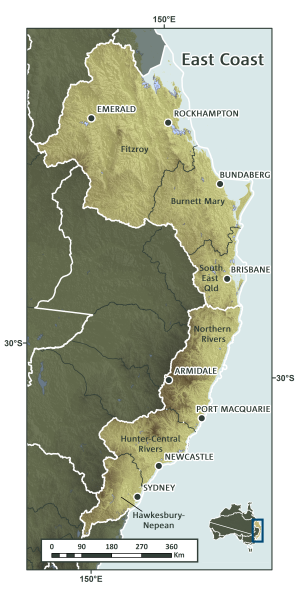 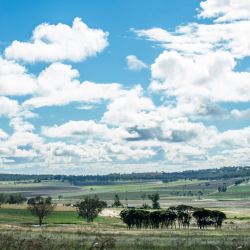 This East Coast project aims to foster and support an effective community of practice for climate adaptation across the region that will increase the capacity for adaptation to climate and ocean change through enhancements in knowledge and skills and through the establishment of long term collaborations among natural resource managers and researchers. The goals of the project are to:

The Research Consortium and NRM partners  brings together an extensive existing portfolio of research and outreach capacity for climate adaptation, including  the South East Queensland Climate Adaptation Research Initiative, the regional climate modeling and software tools developed by the research partners, and the extensive knowledge and experience that lies within the NRM groups.

Early in the project NRM groups and researchers met to scope the diversity of needs for NRM regional planning and identify the availability of existing information and tools.  Our work considers the impacts on and vulnerabilities of the region, integrating both biophysical and socio-economic data.  The project also aims to identify and evaluate options for adaptation, their trade-offs and work toward refining regional planning processes to accommodate their incorporation.