Causes of past and recent change 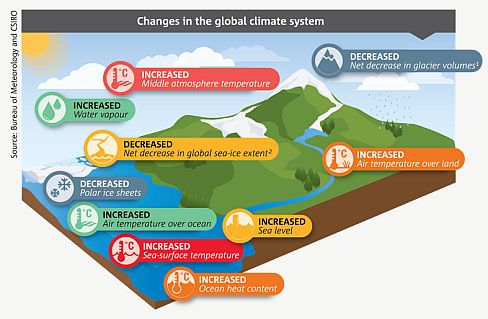 Observational and model studies of temperature change, climate feedbacks and changes in the Earth’s energy budget together provide confidence in the magnitude of global warming in response to past and future forcing. In this regard, human influence on the climate system is clear.

In climate science, ‘attribution’ describes accounting for the causes of observed changes in the climate system.

Climate models can characterise both natural climate variability and changes to the climate system that are driven by factors such as increases in greenhouse gases, variations in solar radiation and emissions of volcanic aerosols. Models reproduce observed continental-scale surface temperature patterns and trends over many decades, including the more rapid warming since the mid-20th century and the cooling immediately following large volcanic eruptions.

Evidence of human influence on the climate system has strengthened over the past decades. Human influence has been detected in warming of the atmosphere and the ocean, in changes in the global water cycle, in reductions in snow and ice, in global mean sea level rise, and in changes in some climate extremes.

The Fifth IPCC Assessment Report concluded that it is extremely likely that human influence has been the dominant cause of the observed warming since the mid-20th century.

Causes of recent change in Australia

Regional climate change attribution studies have shown significant consistency between observed increases in Australian temperatures and those from climate models forced with increasing greenhouse gases. By extension, many aspects of warming over Australia are also attributable to the enhanced greenhouse effect.

The mean temperature changes have been accompanied by a large increase in extreme temperatures. Since 2001, the number of extreme heat records in Australia has outnumbered extreme cool records by almost 3 to 1 for daytime maximum temperatures, and almost 5 to 1 for night-time minimum temperatures. Very warm months (those with monthly averaged temperature above the second standard deviation of monthly temperatures from a 1951-1982 reference period) have increased five-fold in the past 15 years. The frequency of very cool months has declined by around a third over the same period.

In Australia, the record hot summer of 2012–13 was examined. The odds of this event occurring were found to have increased five-fold due to human influences. 2013 also saw record-breaking September and spring temperatures and was the warmest calendar year on record. It was found to be virtually impossible to achieve the 2013 calendar year Australian-average temperatures without the presence of human influences on the climate. Additional studies, using various methods, also found that human influences have increased the likelihood or strength of the Australian heat events in 2013.

Attributing observed regional rainfall changes is a more difficult task than attributing temperature changes. This is especially so in the Australian region, where intrinsic rainfall variability on year-to-year and decade-to-decade timescales is large.

Northern Australian wet season (October to April) rainfall has shown wet and dry decades through the 20th century but with a slight increase indicated in the linear trend in 1900-2012. In recent decades, increases are discernible across northern and central Australia, with the increase in summer rainfall most apparent since the early 1970s. Rainfall during the months of October to April from 1997 to 2013 was very much above average over large parts of the continent. The period 2010 to 2012 recorded the highest 24-month rainfall totals for Australia as a whole, in conjunction with two strong La Nina events.

The southern Australian drying trends are characterised by a 10-20 percent reduction (expressed as a step change or series of step-changes) in cool season (April –September) rainfall across the south of the continent. The rainfall declines have persisted since around 1970 in the south-west and since the mid-1990s in the south-east. It has now been reasonably established that the decline in rainfall has been associated with both fewer rain-bearing systems, and less rainfall from those systems that do cross the region.

While natural variability of Australian rainfall is large, and strongly connected to well-known modes of climate variability, it seems likely from the literature to date that drying across southern Australia cannot be explained by natural variability alone. The most notable proximate driver is the frequency and impact of sea-surface temperature variability associated with the El Niño-Southern Oscillation (ENSO) and the Indian Ocean Dipole (IOD). Specifically, a lack of negative-phase IOD events has been identified as a contributing factor to drying and drought in the south-east since the 1990s.

Expansion of the tropics and contraction of mid latitude storm tracks towards higher southern latitudes (movement of the subtropical and polar jetstreams) have also contributed to cool season rainfall declines in southern Australia. These circulation pattern changes have affected the behaviour of storm tracks moving across southern Australia. Warming also reduces the temperature gradient between the equator and pole, reducing the energy available to mid-latitude weather systems. A contraction of these weather systems toward the pole is partly explainable by both anthropogenic warming and anthropogenic reductions in stratospheric ozone.

South-west Western Australia has experienced a marked decline in the frequency of troughs associated with rainfall since 1975, and an associated increase in weather patterns associated with higher pressure and dry conditions. The decrease in the number of rain-bearing systems crossing the region accounts for about half of the rainfall decline, while the reduction in rainfall from rain-bearing systems accounts for further drying.

The October 2011–March 2012 extreme rainfall over southeast Australia was studied using various attribution methods in separate studies. These found that the record rainfall was most likely attributable to natural variability associated with La Niña, with a small contribution from human influences on the climate system.

Snow depths at four Australian alpine sites (Rocky Valley Dam, Spencers Creek, 3-Mile Dam and Deep Creek) have declined from the 1950s to 2001. In 2012, an updated analysis of snow measurements at Rocky Valley Dam in Victoria from 1954–2011 indicated an ongoing trend to lower maximum snow depths and an earlier end of the snow season. The long-term changes are superimposed on considerable year to year variability. The
variability in maximum snow depth can be well explained by maximum temperature and precipitation from June to August. The earlier end of the snow season is dependent on changes in temperature.

The relatively short time span of consistent records, combined with high year to year variability, makes it difficult to discern any clear trends in tropical cyclone frequency or intensity for the Australian region. For the period 1981 to 2007, no statistically significant trends in the total numbers of cyclones, or in the proportion of the most intense cyclones, have been found in the Australian region, South Indian Ocean or South Pacific Ocean.