The Rangelands cluster region covers much of the Australian interior and spans 3100 km in the east-west and 1400 km north-south. It includes NRM regions in four states and the Northern Territory. These include Desert Channels NRM and South West NRM in Queensland, the South Australian Arid Lands NRM and Alinytjara Wilurara NRM, and Western Local Land Services in NSW. Territory NRM and Rangelands WA NRM are included, except for the northern sub-regions of each, which are in the Monsoonal North Cluster. This vast region contains varied landscapes, including the Flinders Ranges, the ranges of the Pilbara and the Centre, the Channel Country, Barkly Tableland and Western Desert; hence much of the iconic ‘Outback’. There is a wide range of vegetation, from tropical woodlands to shrublands, grasslands and saltbush, and including relatively intact ecosystems. The water features are mostly intermittent, and aside from the coastal rivers of the west, most streams drain into salty lakes, in particular Lake Eyre. The Rangelands Cluster region has no cities and few major towns; there are many small and remote communities.

In early 2013 an iterative process to establish priorities for the project was initiated. Over the course of several months there were a series of regional visits and two workshops which brought together representatives from all NRM groups within the Rangelands cluster and the research team to identify and prioritise what information was required. The result was a set of co-developed and targeted sub-projects to specifically address the critical gaps in the resources available to support NRM planning for climate change in the Rangelands.

In addition, the Rangelands Cluster has collaborated with the Monsoonal North Cluster to deliver Rangelands-relevant outcomes from some of that cluster’s sub-projects. 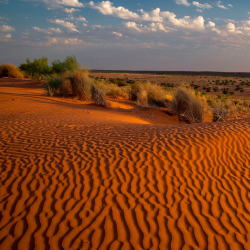 The region is home to many of Australia’s Indigenous people, mining and tourism enterprises and an important agricultural activity is grazing cattle and sheep. Rainfall is a key driver of communities, environment and economic productivity. Rainfall systems vary from seasonally reliable monsoonal influences in the north through to very low and variable rainfall patterns in much of centre and south. Given this, the Rangelands cluster has been divided into North and South parts, and the climate statistics and projections will be mostly given for both. A range of climate change impacts and adaptation challenges have been identified by the NRM groups across this cluster.