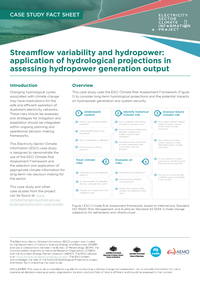 Analysis of streamflow across the Australian national network of hydrologic reference stations (HRS)2 since the 1950s indicates most of the stations in south-eastern Australia show a significant decreasing trend in annual streamflow (Zhang et al. 2016), For example, the Suggan Buggan River, part of the Snowy River catchment in NSW (Figure 1). In contrast, increasing trends in streamflow have been observed within the northern part of the continent. No strong evidence of trends was observed for stations in the central region of Australia and northern Queensland (Zhang et al. 2016).

Increasing dependence for electricity generation on variable renewable energy will require support from hydropower. Projected streamflow changes throughout this century will impact water availability for hydropower generation, so changes in streamflow present risks and opportunities to system security. 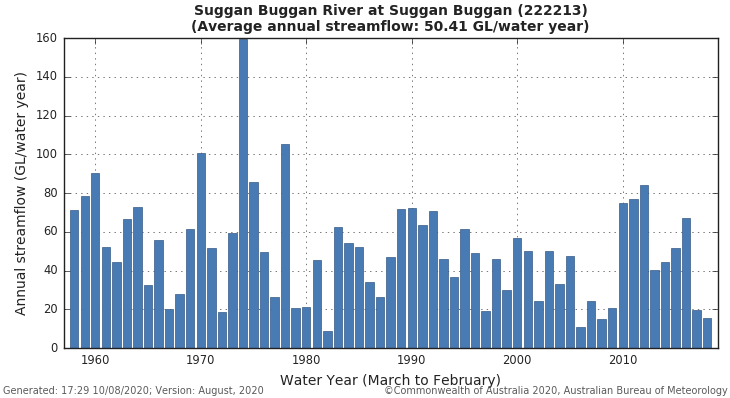 For the ESCI project, historical analyses and future projections have been provided by the National Hydrological Projections project.3 Hydrological projections include root-zone soil moisture, runoff and potential evapotranspiration, all of which will affect streamflow for different catchments (critical to fill hydro dams). These projections were developed to the year 2100 for two emission scenarios (RCP4.5 and RCP8.5), four global climate models and one downscaling method.

Downscaled projection data for eastern Australia at 5-km spatial resolution and daily temporal resolution were aggregated over four time slices centred on 2030, 2050, 2070 and 2085. In addition, time series for changes in streamflow for HRS and for catchments around the NEM have been extracted from 2006–2099. These projections are available for several individual climate models and can be used to construct an ensemble which captures uncertainty in future climate projections.

What Did We Find?

The projected changes are catchment specific, so when undertaking any risk assessment, it is important to account for the projected range of results. Figure 3 shows a mean projected decrease in annual run-off, with high inter-annual variability, for the Derwent catchment in Tasmania for a range of climate projections. 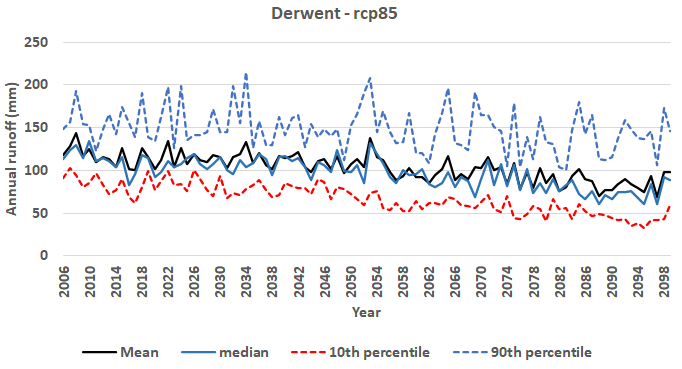 Figure 3. Projections for annual runoff (mm) for the Derwent catchment (Tasmania) based on the RCP8.5 scenario, showing the model ensemble mean, median, and 10th and 90th percentile of the range.

Hydropower and hydro-storage is offered at many sites across the National Electricity Market so streamflow changes are relevant to all these sites. Pumped hydro systems may be less susceptible to changes in water availability as they operate (approximately) as closed systems, compared to traditional hydropower.

The ESCI User Guidance explains how to conduct your own risk assessment.

Download
Full case study report and all figures (zip 1.0 MB)
Back to top
~