Identification of areas that experience similar climatic conditions, but which may be separated in space or time (i.e. with past or future climates) can be helpful when starting to consider adaptation strategies to a changing climate. Locating areas where the current climate is similar to the projected future climate of a place of interest (e.g. what will the future climate of Melbourne be like?) is a simple method for visualising and communicating the impact of projected changes.

The climate analogue tool matches the proposed future climate of a region of interest with the current climate experienced in another region using annual average rainfall and maximum temperature (within set tolerances). This approach was used to generate the analogue cases presented as examples in each of the cluster reports . 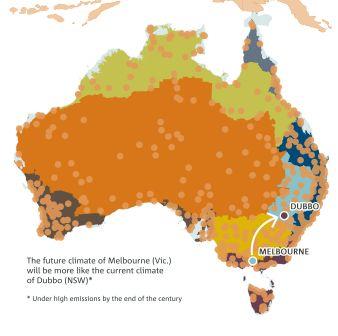 The results from applying changes to annual temperature and rainfall settings in the analogues explorer  capture sites of broadly similar annual maximum temperature and water balance. Users can refine the search for analogues by including potentially important differences in rainfall occurrences and other factors, such as rainfall seasonality (per cent of annual rainfall that falls in summer) and temperature seasonality (difference in summer and winter temperature). (See the tab at top right of the map interface in the analogue explorer).

The depiction on the right shows that after a 3 °C increase in annual maximum temperature and a 15 percent decrease in annual rainfall Melbourne’s future climate matches the current climate in Dubbo (NSW).This could occur under high emissions by the end of the century.

NB: It is important to note that other potentially important aspects of local climate are not matched when using this approach, such as frost days or and other local climate influences. Furthermore, for agriculture applications, solar radiation and soils are not considered. Thus we advise against the analogues being used directly in adaptation planning without considering more detailed information.