Future climate changes over the 21st century cannot be simply extrapolated from past climate. Non-linear processes must be taken into account, along with a range of plausible future greenhouse gas and aerosol concentration pathways. The best tools for projecting climate change are global climate models (GCMs).

These are mathematical representations of the climate system run on powerful computers. Their fundamentals are based on the laws of physics, including conservation of mass, energy and momentum. GCMs are closely related to models used for daily weather prediction.

GCMs represent the atmosphere and ocean on three-dimensional grids, with a typical atmospheric resolution of 200 km, with 20 to 50 levels in the vertical. Models explicitly represent large-scale synoptic features of the atmosphere, such as the progression of high and low pressure systems, and large scale oceanic currents and overturning. However many important physical processes occur at finer spatial scales. Examples include radiation and precipitation processes, cloud formation and atmospheric and oceanic turbulence. The impacts of such processes are included in ‘parameterisations’, whereby their effects are expressed in approximate form on the coarser model grid. Parameterisations are typically the result of intensive theoretical and observational study, and essentially represent ‘sub-models’ within the climate model itself.

Climate models have undergone continuous development for the last three decades, and now incorporate interactions between the atmosphere, oceans, sea ice and land surface. The components of a typical GCM are shown here. 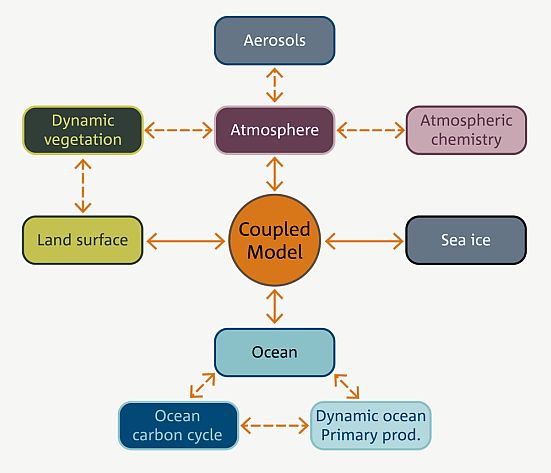 Confidence in models comes from their basis in fundamental physical principles, and from their ability to represent important features of the current and past climate. GCMs have shown a substantial and robust warming signal resulting from increasing greenhouse gas concentrations over several generations of model development. However uncertainties arise, particularly in the details and timing of changes. These come from uncertainties in parameterisations, and therefore confidence in projections is greater in some variables (e.g. temperature) than others (e.g. precipitation). These uncertainties are partly reflected in the ranges presented for projections. A broad suite of climate variables have been reported on for these projections. While most models perform reasonably well, there is no single “best” model or subset of models, and climate projections differ between models (see Chapter 5 of Technical Report).

Although spatial resolution has improved over time, grid scales of global models limit representation of some important regional and local scale features and processes. These can be important for the local distribution of rainfall for example. To try to include such features, techniques for downscaling can be applied, whereby higher resolution are "embedded" within a global model, or where statistical relationships between local scale climate and broad scale climate features are exploited. Regional models and their implications for projections, are discussed in the Technical Report Chapter 6.3.