Uncertainty and confidence in projections

Assessing climate projections is quite different to assessing weather forecasts or even seasonal forecasts. Forecasts take into account the recent conditions and assess how they may evolve in the near future, and they can be continually assessed against observations.

Climate projections are not tied to observations, but are designed to show the response of the climate system to hypothetical, but plausible, scenarios of external factors that affect or ‘force’ the climate into the far future. Climate projections are not expected to give accurate predictions of the temporal evolution of weather events as seen in observed time series. Further, they can’t be assessed against observations since the time horizon is too long, and they produce results for a hypothetical scenario that will probably not play out exactly as specified in the emission scenario. These factors affect what constitutes confidence in climate projections, and how it is assessed. 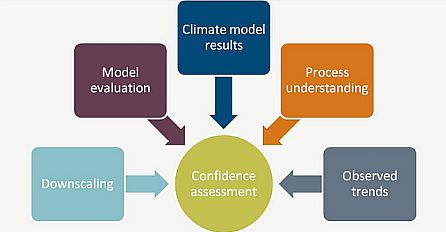 Confidence in a climate projection is a measure of how plausible the projected range of change is for a given emission scenario. Confidence comes from multiple lines of evidence including physical theory, past climate changes and climate model simulations. Here we use the confidence language specified by the Intergovernmental Panel on Climate Change (IPCC) Assessment Reports (also discussed in Section 6.4 of the Climate Change in Australia Technical Report). This considers factors along two dimensions; evidence (type, amount, quality and consistency), and agreement between those lines of evidence. High agreement of numerous, high quality lines of evidence is needed to have high confidence. Confidence ratings are assigned using calibrated language based on expert judgment of the various lines of evidence.

A key determinant of confidence is the quality and completeness of knowledge of processes that drive change. This includes the effect of primary forcings such as the direct effect of greenhouse gas concentration on radiation balance of the Earth, as well as climate feedbacks that can amplify or diminish changes and the role of natural variability compared to the ‘forced’ changes. Past changes that can be attributed to forcings can be used as evidence as to what may happen in future.

Knowledge of the processes involved is required to understand potential future changes, but a system of integrating processes is required to make quantitative projections. This is where we use climate models as a key tool. The performance of the models in simulating the current climate state and past climate changes is used as an important indicator of the potential for reliable projections. The rationale here is that models need to perform sufficiently well at simulating the relevant processes in the current climate for their projected changes to be considered plausible. Models that are not acceptable can be rejected. A clear and consistent direction and magnitude of change from various different models, including downscaling, also adds to confidence in projections. Known problems or omissions in models reduce confidence.

Dealing with uncertainty is a fundamental task when using climate projections into a decision making context. Even where there is high confidence in the response of the climate system to forcings such as greenhouse gases, there is still uncertainty from emissions scenarios, from natural variability and our incomplete knowledge of how climate changes affect the context of the decision. Also, there will always be some inevitable deep uncertainty in the processes involved and their impacts. In cases where the direction of change is clear and we have High Confidence in the approximate ranges of change for a given scenario, such as for mean temperature and sea level, then the main risk management decisions may be about emission scenarios. In cases where there is considerable uncertainty in the response of the climate system to forcings, such as regional rainfall change, projections can still be useful but the decision making framework must be adaptive and put more emphasis on sampling the range of uncertainty in response. Where uncertainty in the response is large, risk assessment may not be possible so it may be more useful to conduct sensitivity studies, monitoring and scenario exercises. Climate Futures is a useful tool for accounting for the uncertainty in emission scenarios and the range between models.