A climate model is a mathematical representation of the climate system. Equations are solved at points on a 3-dimensional grid in the ocean and atmosphere, over a number of time-steps.

Spatial resolution specifies the horizontal size of the grid cells (in degrees of latitude and longitude or in km).

Temporal resolution refers to the size of the time steps used in models; how often (in simulated or "model time") calculations of the climate variables are calculated. 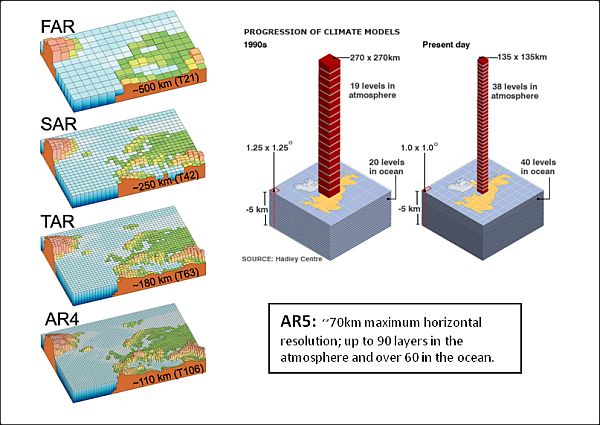 Regional Climate Models (RCMs) can be employed to increase resolution even further. RCMs represent all the atmospheric physics of GCMs but are run only over a smaller area and can therefore have higher resolution (from 60 km down to below 10 km). Typically an RCM is ‘embedded’ within a host GCM, which provides the large scale climate fields e.g. sea surface temperatures, wind and pressure fields, needed to drive the RCM. This is usually referred to as the GCM providing the ‘boundary conditions’ for the RCM.