The atmosphere is largely transparent to the Sun’s energy, most of which arrives in the form of light. At the Earth’s surface, this energy is partly reflected back out to space, and partly absorbed and re-radiated as heat. The greenhouse gases in the atmosphere can both absorb and re-radiate much of the outgoing heat energy.

The atmospheric concentrations of some greenhouse gases are being affected directly by human activities namely carbon dioxide (CO2), methane (CH4), nitrous oxide (N2O), ozone (O3), and synthetic gases, such as chlorofluorocarbons (CFCs) and hydrofluorocarbons (HFCs). Water vapour is also a major greenhouse gas, but its concentration in the atmosphere is not influenced directly by human activities.

Life on Earth depends on the presence of greenhouse gases in the atmosphere to insulate our planet’s surface against the chill of space; without them the Earth’s average climate would be about 33 °C cooler. 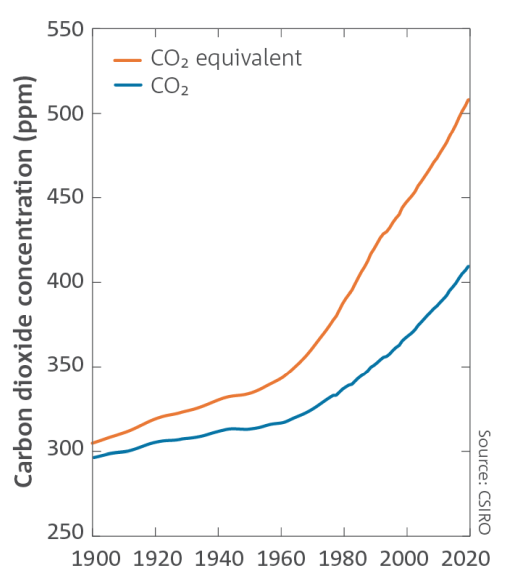 Since the industrial revolution around 1750, human activities have added significant quantities of greenhouse gases into the atmosphere. CO2 levels are rising mainly because of the burning of fossil fuels and deforestation. The global mean CO2 level reached 410 parts per million in 2019, and the CO2-equivalent (CO2-e) value of all greenhouse gases reached 508 ppm. These are the highest levels seen on Earth in at least 2 million years (State of the Climate 2020 ). The Cape Grim air quality monitoring station is operated jointly by CSIRO and the Bureau of Meteorology. It monitors some of the cleanest air in the world, making it a key monitoring station for the global scientific community.

The COVID-19 pandemic led to a decline in global fossil fuel emissions of CO2, yet this will have a negligible impact on climate change.

The additional greenhouse gases are contributing to global warming and to associated climatic changes.

The global average concentration of water vapour quickly rises in response to an increase in global temperature, due to the increased water-holding capacity of a warmer atmosphere. Because water vapour is a greenhouse gas, the original warming is amplified. This amplification is known as a positive feedback.

Half of the CO2 released to the atmosphere is absorbed by natural CO2 sinks, on the land and in the ocean, helping to mitigate emissions from human activities. One consequence of the additional CO2 in the oceans is a 26% increase in acidification since 1750.