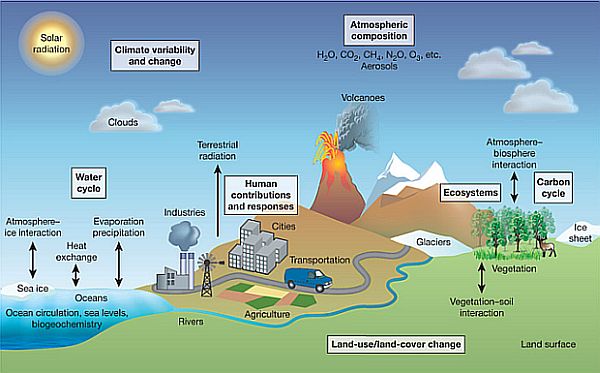 Observations have been made of the Earth’s atmosphere and oceans over the past decades, centuries and even millennia.

Through time, variability of the Earth’s climate has been influenced by external forcing mechanisms such as differences in the output of energy from the Sun , variations in the Earth’s orbital eccentricity, obliquity and precession, land-use changes, volcanic activity, and also the composition of the atmosphere, particularly concentrations of greenhouse gases and air pollution (including that associated with aerosols). It is also influenced by internal forcing mechanisms such as the El Niño Southern Oscillation and Indian Ocean Dipole.

The climate system includes the hydrosphere (oceans and atmospheric and terrestrial water), the cryosphere (ice and snow), the biosphere (animals and plants), the pedosphere (soil), and the lithosphere (the Earth’s crust and upper mantle).

While the official observational climate record extends back only just over a century for Australia, variability in the climate at this higher resolution time-scale has also been documented, particularly for rainfall, with much of the variability being influenced by regionally and seasonally specific Australian climate drivers .

Data analysis can reveal the existence of trends; either to warmer/cooler, wetter/drier. Distinguishing between climate variability and trends, or changes over time are also described in this section.