The future of anthropogenic greenhouse gas and aerosol emissions (and hence their resultant radiative forcing) is highly uncertain, encompassing substantial unknowns in population and economic growth, technological developments and transfer, and political and social changes.

The climate modelling community has developed Representative Concentration Pathways (RCPs) to explore credible future options. The Australian climate change projections found on this site are derived from climate models forced by the RCPs.

These scenarios span the range of plausible global warming scenarios. They provide a range of options for the world’s governments and other institutions for decision making.

Emissions of CO₂ across the RCPs (left), and trends in concentrations of carbon dioxide (right). Grey area indicates the 98th and 90th percentiles (light/dark grey) of the values from the literature). The dotted lines indicate four of the SRES marker scenarios. SOURCE: van Vuuren et. al. (2011) 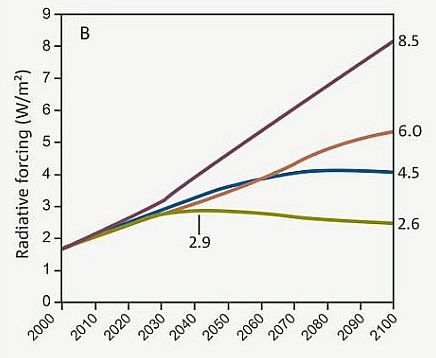 Radiative forcing for the different RCPs. The numbers on the right show the final radiative forcing at 2100 and give each scenario its name (8.5, 6.0, 4.5 and 2.6 W/m²) SOURCE: Climate Change in Australia Technical Report

RCPs are prescribed pathways for greenhouse gas and aerosol concentrations, together with land use change, that are consistent with a set of broad climate outcomes used by the climate modelling community. The pathways are characterised by the radiative forcing produced by the end of the 21st century. Radiative forcing is the extra heat the lower atmosphere will retain as a result of additional greenhouse gases, measured in Watts per square metre (W/m²).

The RCPs represent a wider set of futures that the previous emissions scenarios used by climate modelling community (SRES), and now explicitly include the effect of mitigation strategies. As with SRES, no particular scenario is deemed more likely than the others, however, some require major and rapid change to emissions to be achieved.

There are four RCPS

RCP8.5 - a future with little curbing of emissions, with a CO2 concentration continuing to rapidly rise, reaching 940 ppm by 2100.

RCP2.6 - the most ambitious mitigation scenario, with emissions peaking early in the century (around 2020), then rapidly declining. Such a pathway would require early participation from all emitters, including developing countries, as well as the application of technologies for actively removing carbon dioxide from the atmosphere. The CO₂ concentration reaches 440 ppm by 2040 then slowly declines to 420 ppm by 2100).