Australia is affected by many different weather systems. Our climate can vary greatly from one year to the next. This climate variability is driven by many significant climate features that will have varying levels of impact in different regions at different times.

Important climate drivers in Australia include El Niño-Southern Oscillation (ENSO), the Indian Ocean Dipole, the Australian monsoon and the Madden-Julian Oscillation, and the Southern Annular Mode. These drivers have varying levels of influence on rainfall in Australia over different regions and seasons. 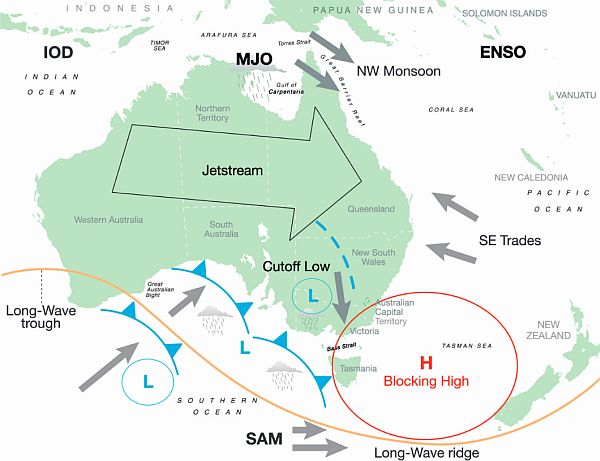 Schematic representation of the main drivers of rainfall variability in the Australian region. The dominant features are the IOD, MJO, and ENSO in the tropics, and the SAM and blocking in the extratropics. SOURCE: Risbey et al 2008

The Australian monsoon is created by the summer heating of the Australian continent and the resulting change in temperature between the land and the sea. The monsoon is responsible for the tropical wet summer and dry winter. The monsoon can be in either an ‘active’ or an ‘inactive’ phase. The active phase is usually associated with cloud, thunderstorms and rain. Transitions from active to inactive phases may be associated with the Madden-Julian Oscillation, a large-scale slow-moving band of increased cloudiness that travels eastwards in the tropics.

The northern wet season is also the tropical cyclone season in Australia. Most tropical cyclones occur between November and April, with an average of 11 affecting the Australian continent each year. Southern Australia is also affected by a more large-scale circulation climate influence, called the sub-tropical ridge. It straddles a belt of high pressure that encircles the mid-latitudes of the globe. The position of the sub-tropical ridge plays an important part in the way our weather varies from season to season.

For a fun take on the drivers of Victorian rainfall view the Climate Dogs animations.

The IPCC (Chapter 12 in IPCC, 2013) concluded that there is high confidence that ENSO will remain the dominant mode of year-to-year variability in the tropical Pacific, with global effects in the 21st century. Global warming is expected to increase the frequency of extreme El Niño events and extreme La Niña events.

Increased intensity (higher pressure) in the subtropical ridge  in the wider Australian region has been linked to a marked decline in the frequency of troughs associated with rainfall since 1975 for south-west Western Australia, with the increasing pressure potentially explaining two-thirds of the rainfall decline in those regions.