For many decades, palaeoclimatologists have examined how the Earth's temperature changed over the centuries before 1850.

From this work emerged a view of the past climate based on limited data from tree rings, historical documents, ice cores, sediments and other proxy data sources. Today, many more palaeoclimate records are available from around the world, providing a much improved view of past changes in the Earth's temperature.

The Earth’s temperature has fluctuated naturally over hundreds of millions of years. These past changes can help us understand the relationship between temperature, greenhouse gases and other climate drivers today.

Some of the clearest changes in temperature and atmospheric composition are recorded in ice cores over nearly 1 million years. The Earth has experienced cycles of ice ages separated by warm interglacial periods approximately every 100,000 years. These are primarily driven by regular “wobbles” in the Earth’s orbit, which affects the amount of solar radiation reaching the Earth. During the onset of interglacial periods, the warming takes about 5000 years to complete.

Significant warming begins in the Antarctic and several hundred years later the warming causes the carbon dioxide (CO2) increase, mainly through ocean processes. The Northern Hemisphere deglaciation follows the CO2 increase. Therefore, increases in CO2 contribute an amplification (positive feedback) throughout most of the warming. The ice sheets also cause a feedback. The observed temperature changes and rates of change during glacial-interglacial periods cannot be simulated without the observed changes in CO2 or ice extent.

The past 11, 000 years (the Holocene) is marked by much smaller global temperature changes, typically up to 1-1.5 oC. Greenhouse gas concentrations were also relatively stable until the large and rapid increases that began about 200 years ago as a result of anthropogenic (i.e. caused by humans) emissions. The concentration of CO2 is now higher than for at least the past 800,000 years.

Although each proxy temperature record is different, they all indicate similar patterns of temperature variability over the last 500 to 2000 years. The terms Medieval Warm Period and Little Ice Age describe two past climate epochs in Europe and neighbouring regions. The Little Ice Age was a period of cooling that occurred after the Medieval Warm Period.

Thus, during the past millennia there have been lengthy periods of somewhat warmer and cooler conditions. Most striking is the fact that each proxy record reveals a steep increase in the rate or spatial extent of warming since the mid-19th to early 20th centuries. Records indicate the temperatures of the most recent decades are the warmest in the entire record (see figure).

The instrumental record indicates changes over the last century as summarised in the latest Intergovernmental Panel on Climate Change (IPCC) report: 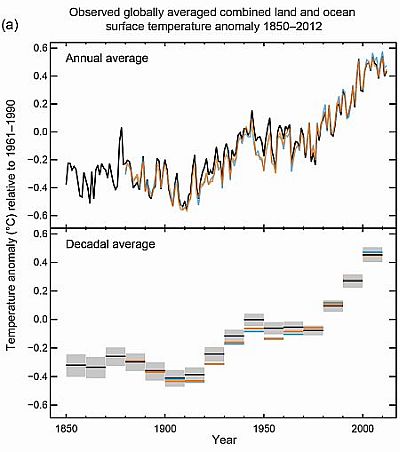