Comparison with Climate Change in Australia 2007 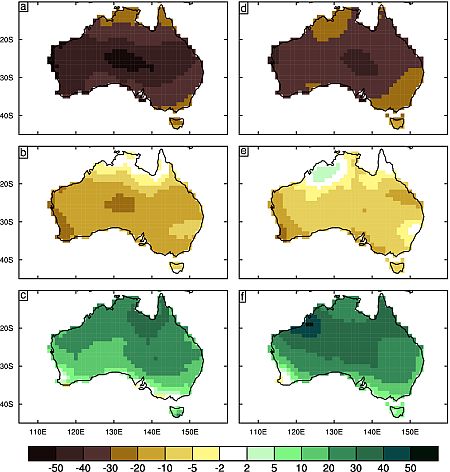 Appendix A of the Technical Report compares projected changes based on CMIP5 with those based on CMIP3, as used for Climate Change in Australia (CSIRO and BOM, 2007). In 2007, the range of change in each variable was presented in a probabilistic form, with the change at each location, for a given scenario and time in the future, being represented as a probability density function (PDF). The method used relies on the pattern scaling approximation, as described in Section 6.2 of the Technical Report , with further details given by Watterson (2008). In order to derive comparable results the method is applied again using CMIP5 data. The range in the PDFs allows for both the uncertainty in the global warming and in the local response to it (or ‘change per degree’), with both factors based on the ensemble of models. For CMIP3, 23 models were used, while suitable data are available from up to 40 CMIP5 models . For some variables, the local response factors were derived from fewer models, as noted below. The model change per degree data are first interpolated to a common one-degree grid of points at which the local changes are calculated.

Results are presented for six surface variables that are important to climate impacts. The focus is on the Australian maps of annual changes for three percentiles, the median, denoted P50, and the P10 and P90 values representing the upper and lower values across the likely range.

Figure from Appendix A can be found on the Publication Library's Figures and Maps page.